April Blog 2019
You have to hand it to Adelaide, it does Autumn really well. The days are warm, with the odd cool one thrown in with some much-needed rain and not over the top hot. The evenings are cool enough to enjoy being outside for a walk under the stars or a meal without the ‘squitozzz….and to be able to sleep comfortably at night and with the quilt on again is divine. 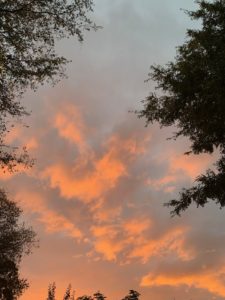 Spontaneously, I decided to pull down from what I would call is an ‘inspiration doorway’, some affirmations that I’d done along with other bits and pieces. These were representing aspects of last year and drifted into this that I used as guide posts. I was happy to have them be there to view in the back ground, working with my subconscious mind, until the moment arrived where I felt it was time to move them on. The affirmations were symbolic, aiding me along in this specific part of my life. I was content with them there, it wasn’t an issue, and I had thought, occasionally, if I should move them on and thus the moment presented.

I considered keeping part of them filed away as a record as they were very creative but I then recalled already having things noted in a book. So, I made a conscious choice to gather them together, thank the gifts that guided me to this moment and went outside and burnt them off. Yes, it was safely done, contained and looked after from start to clean up. The ritual or process was now complete. Mind you I could’ve cut them up and thrown them in the bin, but these spoke loudly enough to burn them off, it felt pertinent to do so, that, what I was doing was honoring what I was asking for guidance with and it was time to shed them in flame. Not put in a bin as that felt disrespectful.
This is just the beginning of a much needed tidy and move on from, it’s that time of the year.

Any time is ok really but have the ‘piles’ around you become high?
And what about the molehills that have become like mountains in our mind? Parasitic thought forms need to be addressed. They become habits, they then move onto be the way you think and speak daily and become a lifestyle and that is toxic, life defeating.
I would suggest that we each honor our individual pathway by taking the time to write what it is you feel needs to be released, rather than share and discuss over coffee at a place filled with a variety of energies, not conducive to sharing your personal world. And what you write doesn’t necessarily have to be negative.

Learn to be discerning with feeling ‘does this person or place ‘feel’ good to share my thoughts’, whether it be of concern or excitement over whatever it happens to be.
The lessons are about you and trusting yourself to be able to know the difference between the safe place or person. ‘This doesn’t feel good’, is very telling and most importantly your instinct reminding you not to get caught up in continuing any drama, or attaching yourself to another for their approval.

Try it, writing that is, some may say, ‘I don’t want to do that sort of thing’. Well don’t, that’s ok, but it is an integral part of the exploration and getting past resistance is the first step. Which is ‘I don’t want to do that’! Writing your feelings down, is like the first aspect of building anything, look at it as the materials to building a bridge, integral for the construction of. Along with the removing of any covering protecting the materials need to be shapeshifted, moved on from. Then the next stage happens.
Just do it, try it, on your own, and you can either keep it or move it on, no one has to read it, you decide it’s your choice.

Then once you have done some writing listen for what ‘your’ next steps are, which could be as simple as making a cup of tea, going for a walk or taking a shower. I can give plenty of ideas but the thing is to empower yourself, and is continued learning to feel and listen to your inner self. That is where the majority of the answers are. Shifting the inner suffering or disgruntled nudging has the potential in changing our life path from something that’s not working to sorting itself out and other opportunities arriving, and always on time, universal time.
You can ask me questions or go to my
Web: www.frizzkirby.com or call MB: (61) 0417 850 748
Blessings & Grace
Angela